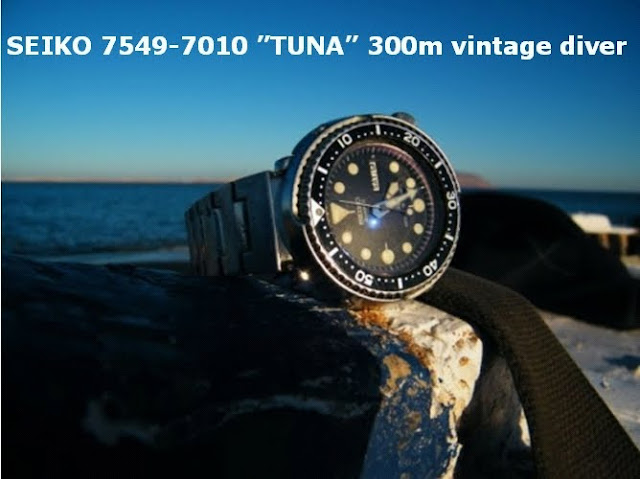 
It was a dark and stormy night - I lent my son my Tuna to time a five minute foot bath (his foot), and he unintentionally dropped it on a particularly hard floor. Subsequently it ran intermittently, stopping for a while only to run again an hour later. This carried on for a few days, so I opened her up, checked the battery was seated ok, and it was.


At this stage my immediate reaction was to install a spare 7548 movement I have been saving for a project and send the 7549 module for a service. However, 7549 hands will not fit a 7548 movement, as the 7548 movment was developed on the basis of the 6309 mainplate, canon pinion and hour wheel. I wonder if Seiko originally planned to use the 6309 auto caliber in the Tuna, and switched to quartz during its development? Anyway, I was in a quandry as to whether I should install the 7548 caliber with 6309 hands, or whether I should retain the original caliber, dial and hands.


At that precise moment I received a mail from Ken Setser, who encouraged me to take on the diagnosis of the faulty movement, and provided me with a step by step diagnosis strategy. Ken wrote:Harry,The first thing you want to do is to determine if you have a mechanical or electronic problem. 1. Check the battery2. Check to make sure screws are tight and battery insulator is in place. 3. If everything above checks out then you want to get a small compass and set it on the coil(copper colored). The coil should pulse every second and the hand of the compass should deflect whenever it pulses. If the compass hand moves then the problem is mechanical. If it doesn't then the problem is electronic. 4. You want to determine if the problem is in the coil or the electronic module. If you have a ohm meter you can check for continuity in the coil. My guess that the coil would be the problem if it is an electrical problem. If you can, do step 1-3 and let me know what you find. Ken


Under the microscope I was able to confirm that all connections appeared to be intact, and that the jewels and wheel where sitting correctly.

Jewels and small things seated as they should be.


The next step was to test the coil. A quick trip to the local tourist store netted a small compass, which I placed directly on the movement.

The compass was placed directly on the movement.


For a particularly fascinating video, please see: http://biocomm.eu/7549repair/5.wmv (Remember popcorn). Say, does anyone know how to embed a video?

Hear the tock-tock in the background? Thats our grandfather clock!


So I proudly answered Ken:


Hi Ken I can confirm that when the watch stops, the compass stops moving (as opposed to the 1-sec pulses of the needle clearly obvious when the watch is running), suggesting that the problem is electronic. The movement tends to restart when I wear the watch, but leaving the watch on a hard surface overnight will leave it in a stable state, ie running overnight if left when running, dead overnight if left when dead. I have tried gently prodding the movement to induce running, without luck. The movement will often start running when I loosen the caseback, but not always - I'm sure this is an important piece of information... Am I correct in assuming that the next phase is to localize the source of the sporadic elctronic breakdown, between and including the battery (tried two new batteries) and the coil, on the circuit block itself? Incidentally, I have a spare 7548 movment - would it help troubleshooting to try to replace the 7549 circuit plate and coil with the entire working 7548 circuit plate and coil block, then with the 7549 plate / 7548 coil and vise versa? Of course, if the 7548 plate and coil are a straight switch (wishfulthinking) the problem would be solved, but I would really like to identify the source of the problem just for the challenge of it... The quest continues - I feel like I am playing a sort of WIS chess here! RegardsHarry

Harry Great troubleshooting techniques. Here is what I think and what I would do. Since the problem is intermittent, I suspect a loose connedtion somewhere. Could be the battery to circuit; circuit to coil; or internal coil problem. I have attached some tech sheets for the movement so you will have some reference. 1. Check the - battery contact to make sure it is firmly attached to the circuit board. Also make sure it is raised enough to make firm connection to the battery 2. Make sure + battery strap is firmly attached to both sides of the circuit. 3. If you look at the circuit just to the left of the word "Japan" you will see a small cutout. Look in the cutout and you will see two gold colored fingers. These are the connections from the circuit to the coil. Make sure they are touching the coil underneath. The best way to do this is to remove the circuit and turn it over. the tech manual has the steps. 4. After you remove the circuit you can check the resisance of the coil. The resistance doesn't matter so much in your situation, only if it is open. 5. If, after doing steps 1-4 everything is ok then clean all the contact points with a pencil eraser, making sure you remove all bits of eraser when done. Reassemble the watch then try it. 6. Let me know what you find. Ken

So, at this stage I was sitting looking at a 7549 movment with an electronic fault, and beside it I had the 7548 movement I had originally planned to insert as a donor movement.


I then remembered that the 7549 was built around a 6309 mainplate, and it began to dawn on me that the 7548 and 7549 movments had different canon pinions and hour wheels (and thereore different minute and hour hand hole sizes), but the two movments I had before me seemed to have identical circuit blocks and coils! I quickly dug out a spare 7546 caliber movement, and again the circuit block and coil appeared identical!

The FrankenTuna, with culprit coil, and now-spare-7549 circuit block and magnetic shield.

While doing this I noticed the antimagnetic shield plate was missing (!) from the original 7549 movement, so I also scavenged the ditto part from the 7546. This failed to solve the problem, but I remembered that the 7546 movement was dead when I got it (these things happen when you get to my age) so the next step was to transfer the coil block from the 7548 movement and - hey presto - it lives!

The lesson learnt thus far is that 7546, 7548 and 7549 coils, circuit blocks and antimagnetic shield plates are freely and easily interchangeable. Considering that it is relatively easy to source 7546 and 7548 parts movements, this could certainly be useful information for some!

I fitted the now strongly-running movement into the case, snugged down the caseback and now have a caliber 7549 Tuna running a caliber 7548 coil in a caliber 7546 circuit block! This is the beauty of the 6309/6 and the 75xx series - they are so closely related and follow Seikos "Lego block" approach!

This amazing thing in this story, however, is that a professional watch restorer like Ken Setser would take the trouble to contact me, and the time to walk me through an extended diagnosis and repair process. And therein, children, lies the essence of the spirit of our WIS community. Thanks, Ken.
Indsendt af HBTeicher kl. 3:55 AM